This year’s book number three brought me back to my teenage years. 21 Dares is packed with references of Buffy the Vampire Slayer, plus it felt like I was reading an R.L Stine book with its annoying cheerleader characters (there’s hardly a cheerleader in this book, but you’d get what I mean.). I have some issues with this book and I didn’t read the reviews so I don’t have a clue what the other readers have to say. 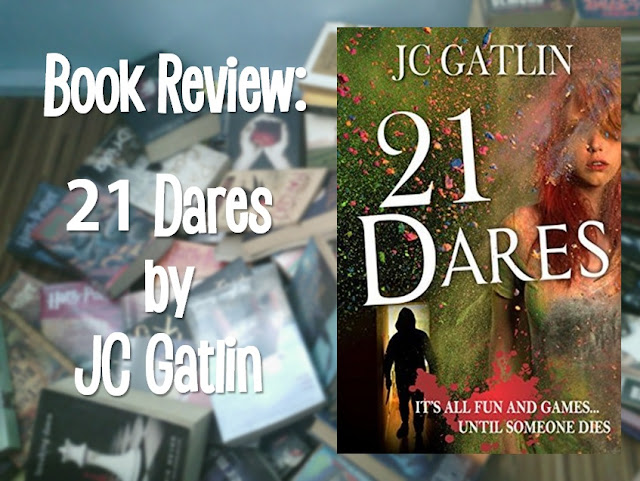 What Is It About?

Abbie Reed barely has friends, and the few people she’s got decided surprise her on her 21st birthday. There are 21 dares that she needs to perform in order to meet her special “birthday guest.” But as she, along with her friends went about town to perform the dares, it starts to get murky and dark, and now she needs to figure her way out of the danger.

Okay, first of all, the pacing got me kind of frustrated because it wasn’t as fast as I thought it would. For the first half of the book, I kept reading about Abbie’s stalker and how it scared the hell out of her. There wasn’t any excitement at all, until I reached the 62nd% of the book, I kid you not. The first half was all about Abbie getting scared for no reason at all, and also performing lame dares (well, not exactly) that would lead her to her supposed “surprise guest”. Initially I thought of already putting down the book and call it a night, but I was already halfway and I didn’t want to be left hanging.
Abbie appears to be the typical “damsel in distress” that can be found in all sorts of books I’ve read, which I think is understandable given the fact that she had a traumatic experience when she was five. Maybe there are really some things that cannot get fix even after years of therapy. Anyway, this sort of character has become less appealing to me now. I don’t if it was because I want my girls to be reliable and strong, as opposed to those who always need help.

What are friends for?

McKenzie is one the most annoying book characters I’ve ever encountered (along with Dolores Umbridge!) I should say the author did a good job in making her character annoy me to the core, the kind of annoyance that would make you happy if something bad happens to her. I think that’s what comparative suffering the book talks about (see, I’m learning!). Susan appears to be a potential best friend who changes her life principles as much as she can—one minute she didn’t want Abbie to do the dares anymore since they’re becoming more and more dangerous and the next minute she didn’t want to call the police and told Abbie to continue the dare to save her friends. Dharma and Josh I think, are the ones who are really for keeps. And Rocky, that ultimate weirdo is just so creepy with his network marketing strategy.
I cannot promise that you’d totally enjoy the book, because I might only give it a 3 on Amazon. Still I would invite you to read it because it might just work for you. Get your copy from Amazon right here. I think it’s still free.
Spread the looooove!
xoxo,
Beth G. ♥

#2015BookChallenge: The Unbecoming of Mara Dyer

Kdrama review: Her Private Life and some fangirling shenanigans