Maybe the quarantine did some good – now I have an ample amount of time to read at night.
I discovered this book when I Googled my own book Right Where You Left Me. Thankfully this is the only other book with the same title as mine, but I also told myself that I have to get hold of it and read it and see what it is about. The blurb offered as much information as finding out it’s a YA book, and that it’s not romance (at least that’s not what the novel is focused on). Luckily I found a second-hand book shop that sells this and I didn’t waste any time to grab the opportunity. 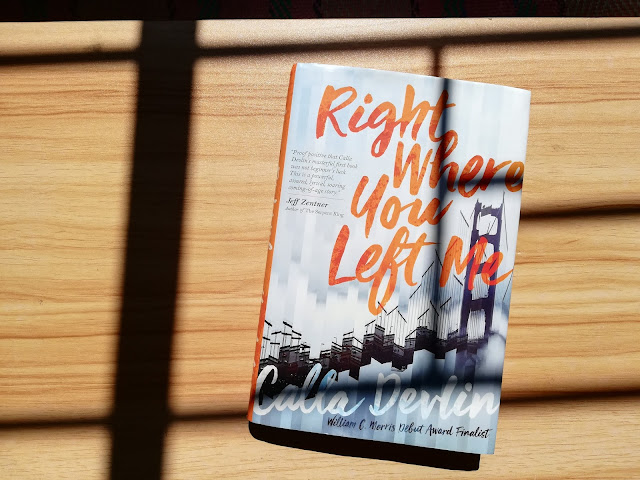 I’m not sure if it’s just me, but whenever I find the words Ukraine, Russian reserve, FBI, and newspaper together in any form of art and/or literature, I always think of an exciting, adrenaline-rush-inducing book or movie about Russian spies and wars and kidnappings. But the kidnapping is the only thing that I got right. Written in the point of view of the 17-year-old Charlotte, this book is about her journalist father who was abducted by an unknown terrorist group, her silent relationship with her estranged Russian mom, and her ability to do just about anything to show how much she cared.

This book is just like any other YA books I’ve read in the past – there’s a teenage girl who does exceptionally well in school who cannot live without her mediocre best friend who’s coming from a more well-off family. There’s also her inexplicable growing interest in the most mysterious and notorious boy in school. Everything is going super perfect until one day – boom! Something that’s out of her control happens that would blow everything out of proportion, and with the help of her mediocre best friend and the notorious guy she’s crushing on who miraculously likes her back even before the story started, she’ll figure her way out of the mess. All of them sound the same that I would like to think they follow a certain formula.
This novel has a lot of elements that set it apart from the others, though. I think it’s fascinating to read different books regardless if it’s the same style and formula, especially if it’s written by authors coming from different cultures. The book is oozing with Russian culture – from children folklore to superstitions, it allowed me to have a glimpse of what’s in the other side of Russia’s history of war. The little stories about Father Frost and the baby made of snow brought me back to my childhood days, when my grandfather would teach me life lessons thru his self-made fables. The cakes and pastries mentioned in Valentina’s (Charlott’s mom) bakery also provided an insight on how Russians grieve and celebrate – that there’s also certain food to serve depending on the occasion – if it’s a celebration of victory, or a funeral. And yes, they also have their own version of superstitions and bad luck and omens. Clearly, there’s a lot of things that school doesn’t teach us.
Needless to say, I cried during the part where Charlotte had to patch things up with her mom. I didn’t understand what kind of relationship they had until I reached the tenth chapter. All the while before that, I thought her mom was keeping to herself because she’s a Russian spy who’s the sole culprit for her dad’s abduction (sorry, I can be heavily influenced by movies sometimes). But no, I was wrong. Valentina’s silence is rooted from a far deeper source of grief, sadness, and fear. I also thought at first that the romance angle between Charlotte and Josh is unnecessary, but then as the story progresses, I realized that without it, it would have been a dry read. All the characters have their own significance to the story, which I also like. It makes it a whole lot relatable to me. Plus, the words are played very well – the sentences are written beautifully they’re almost lyrical, something that I seldom encounter in the books of the 20th century.

Right Where You Left Me is a magnificent coming-of-age story that talks about family relationships, and about friends who mean well. It’s also about taking the time to understand something in order to accept it fully. And even if we’ve seen this all in other books, let’s just focus on what sets the books apart from each other.
Should you read it?
Yes, I’m giving it 4.5 stars.

Where to get the book

Links on where to purchase are available at the author’s website at http://www.calladevlin.com/. As I said, I got mine secondhand from an online bookshop on Instagram.

Book review: You Can Wind Down From Time To Time

Mula Sa Buwan: Another Story of Selfless But Unrequited Love