I do not have comicbooks, except for the one volume of Pugad Baboy that my brother bought several years ago. My logic was that, I need to get my money’s worth, and by this I mean that I should be able to read a full novel, or something that could keep me company for at least 3 nights or so. But maybe comicbooks were created for more than just that. 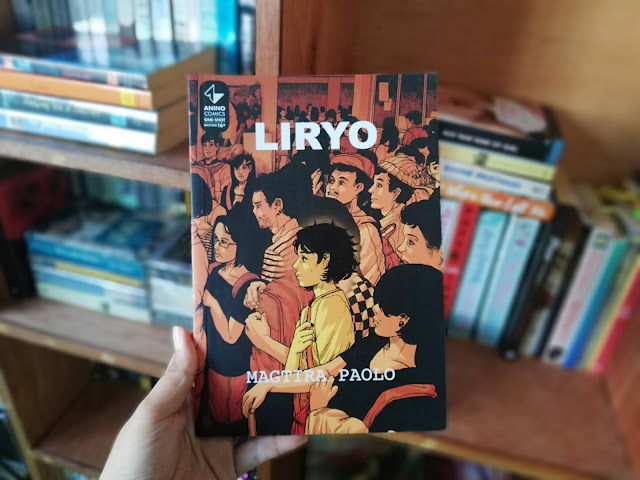 I’ve never heard of Magtira Paolo before, maybe I haven’t been to enough literary symposia and book events where I could’ve possibly met him. His Liryo is a heartbreaking illustrated narration of the pointless battle called The War On Drugs, where innocent lives are lost and nothing was gained. While it could have been said in so many words (some authors can make an entire novel about it I suppose), this comicbook has its own way of allowing me to experience Celso’s hopelessness as he became the representation of all faceless men who became victims of ruthless executions sans due process. It also allowed me to experience Marcy’s utmost reluctance combined with fear in living in this hellhole she works so hard to escape. Amd oh yes, I thought at first Marcy was a victim of domestic violence, hence the 16+ rating. But no. There are some toe-curling scenes a romance writer in me highly appreciates. All of these were written in not so many words. They were drawn, cartoonized faces and all. So much happened in one panel or two, without words. Kinda like a silent film. And I think that’s beautiful.

Should you read it?

Where to get it

I got this book on a whim when I dropped by the National Book Store in Shangri La on my way to Ateneo to see Dekada ’70 Musical. Kim said I should also put it in my cart because the cover is superb. Needless to say, I got three books that day, but all of them were on sale and I felt the need to console myself because I was told the Dekada ’70 book was already pulled out (or maybe the lady was just too lazy to get it from the stockroom because days prior I asked for a certain book and she said it’s no longer available but I got that book that day, too).

Take me back in time… again: Longing Heart Kdrama review

Mula Sa Buwan: Another Story of Selfless But Unrequited Love

Things I’ve Learned From The Probability of Miracles