It was after reading a Gayle Forman book that I became determined that I should travel the world in the hopes of finding something that would “stain” me. I requested for I Have Lost My Way from my then-unknown monita for our company Christmas exchange gift because I really had no idea what to ask for. I’ve always loved books as they used to be my only indulgence, so why not? Plus, I’ve read books by the same author and I enjoyed each one of them. Besides, I promised myself I’ll read more this year, and I’m all about keeping promises to myself because no one has ever kept his promise to me these days. 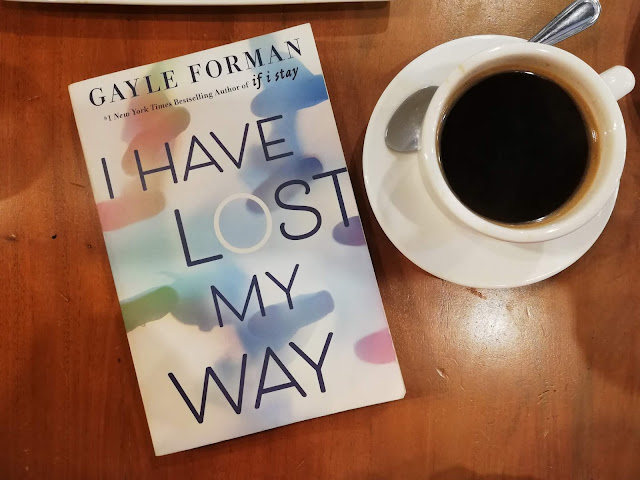 What is it about

Three strangers met in such a fateful way – an emerging singing artist who suddenly and inexplicably lost her voice, a guy who just broken up with his boyfriend, and another guy who decided to go some places after he lost his father. Freya, Harun and Nathaniel have different life struggles but all of them experience the same deal – loneliness, loss and neglect. Their entire strangers-to-friends story only happened in one day, in interchanging POVs and ended in an amazing epiphany.

What I love about it

I love how the characters are diversified. Freya is half-Ethiopian and I imagine her glorious bi-racial features. Harun is a gay Muslim and Nathaniel, despite the pretty-boy description of him only has one eye functioning due to an accident involving his father. I came to like the fact that in newer books, authors are actually trying to create representations of everyone. Living with an invisible disability has somehow marginalized me and people like me and though it’s super minimal, it’s a wonderful feeling that Nathaniel somehow represents us in this book. It’s also one of the reasons why my books have gay characters in them, aside from the fact that I love my friends in the LGBT community.

The story was beautifully written that I was able to feel each of the character’s pain and confusion. Harun’s life felt too miserable, having to give up so many things because he’s too afraid of the stigma (he wanted to be a pilot but what American carrier would hire a Harun Saddiqui as a pilot is one of the saddest things I’ve read in this book). His sexuality would no doubt devastate his parents. He appeared to be lost and torn between being himself and going with what the society dictates as morally acceptable and that cost him his happiness in the process.

Meanwhile, Nathaniel’s childhood could have been too wonderful, had his father has the competence to raise him well. Being in that “fellowship of two” Nathaniel felt too suffocated, and became accustomed in telling everyone that everything’s okay despite the fact that he’s actually falling apart. In the end, he came to the verge of losing everything, including his life. I related to this the most – there was a time in my life as a chronically-illed person when I would feel obligated to tell people that I’m okay, because I was way too scared to be misunderstood and eventually people will leave. True enough, some of them did. But I am thankful that most of them stayed and even tried to understand what’s going on with me. I’m glad that Nathaniel met people who were willing to listen, understand and stay with him, people like Freya and Harun. And Freya… I’ve read so many stories just like hers both in fiction and in real life (cue: Overprotected, Britney Spears).

The interchanging POV from first person to third is somewhat confusing and I should say I’m not living for it. The flow of story is great, except for the first part where I felt like I had no idea what’s going on and who’s narrating and I had to go back a page or two. I also tried ignoring the chapter titles because it created more confusion for some reason.

I Have Lost My Way triggers an emotional upheaval, but in the end, the epiphany is heartbreakingly satisfying that I felt happy for the characters. This story proves that even the people whom you trust with all your heart can turn you down. Maybe we don’t need a lot of people in our lives. Maybe we only need those few who are willing to listen. Those who give time when we’re too shy to ask for it. Those who open their arms when we’re too broken to ask for help. Those who’d tell us true things when we’re choked in tears and couldn’t speak. Those kind of people.

This book is full of sad things yet the realizations spark joy. I think I’m going to keep it.

How I did with Spotify’s 2020 Wrapped

Heartstrings made a fangirl in me